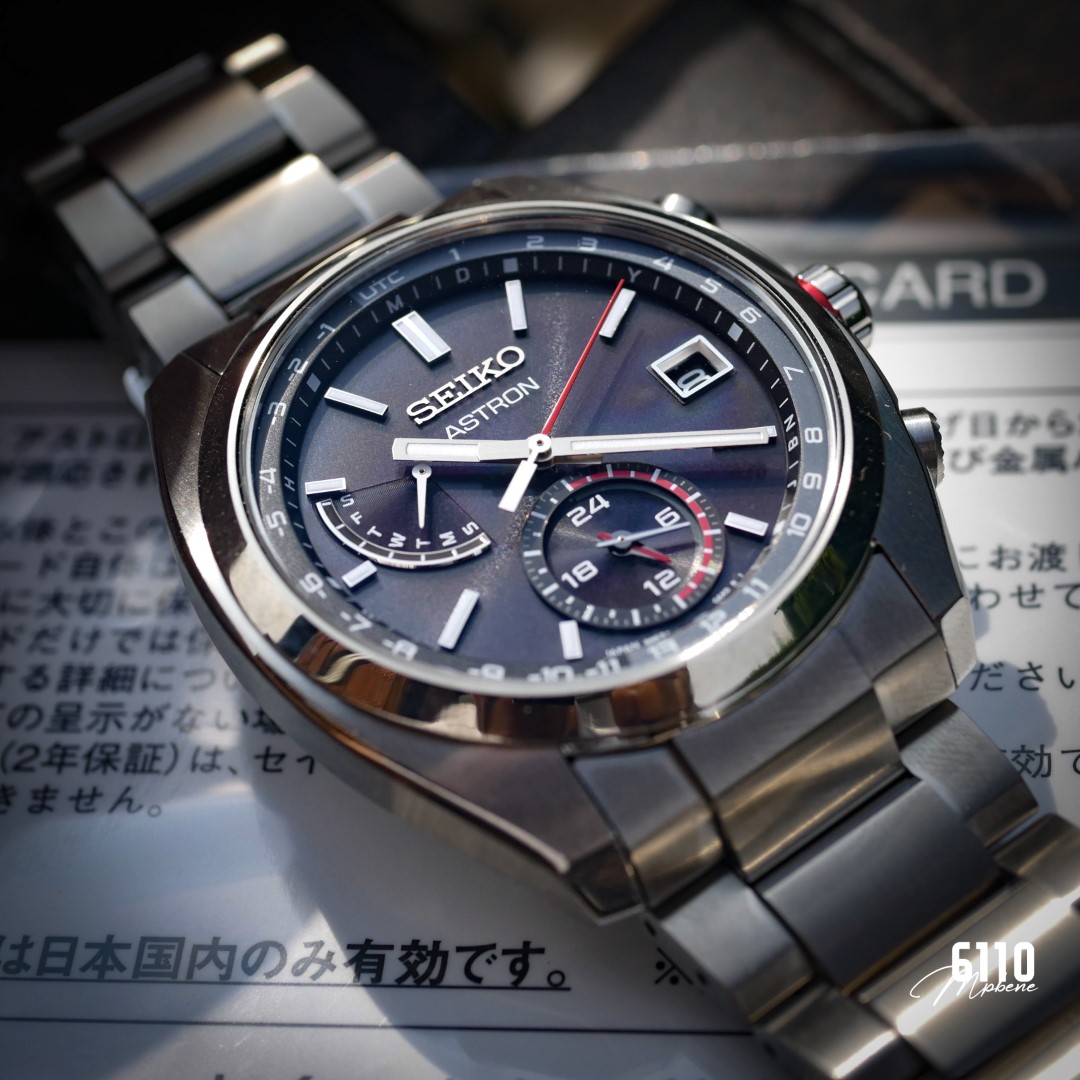 My new blog entry is about a watch which most of my readers probably never will buy: The Seiko Astron SBXY017 from the new Astron series. At first glance it doesn’t fit in my collection which contains mostly vintage or vintage inspired watches. The SBXY017 seems to be quite the opposite. A solar powered movement with radio control. A modern everyday watch and a very comfortable too. Only 10mm thickness and made totally of scratch resistant titanium it’s easily the best wearing watch on my wrist I ever had. But no vintage connection. Really?

History is always important for me. So let’s make a short time travel. In 1964 Seiko was official timekeeper of the Olympic Games in Tokio. They use big portable quartz watches for exact time measure. A novum, in Rome 1960 traditional mechanic stopwatches were used. Seiko had alle the knowledge about this new technique and decided to develop a quartz wristwatch.

Some Swiss companies were working on the same “next big thing”, but Seiko had a big advantage. It was (and is until today) a fully integrated company, developing and producing all parts inhouse. The Swiss watch industry in comparison evolved over 200 years in a different way. Most companies specialized in watch parts like dials, cases, hairsprings etc. Almost all well known Swiss brands used at least a dozen suppliers to build a watch. To develop a whole new technology with many new parts means to share knowledge, talk about responsibilities and costs. No company alone was able to bring a new technology to industrial level, which means to produce watches in great numbers for a reasonable price. So they focused on other things like the first automatic chronograph movements. It’s a joke of history that Seiko too was the first company to deliver this watches in numbers. The 6139 movements were sold in the beginning of 1969 while Heuer/Büren still had problems with their prototypes and Zenith delivers only very few pieces. But that’s a different story…

Why didn’t make Seiko a big fuss about their automatic chronograph movements like the Swiss companies did? It’s very likely their first prototype beat Heuer and Zenith for some weeks. The answer is easy. The big thing in 1969 wasn’t the 6139 movement – it was the Seiko Astron, released in December 1969 as the first ever quartz wristwatch. For 450,000 Yen they delivered a watch with an accuracy of +/- 5 sec/month (better than most quartz movements today), a hundred times more accurate as any other watch back then. The design was a result of an in-house competition. The watch should look “luxury and slim”.

We all know what followed: Prices dropped in a very fast way. The Swiss companies had no answer and the so called “quartz crisis” began. In fact it was more of a structural crisis. Seiko opened their patents but the Swiss companies can’t bring all the parts form different companies together. The business models of most companies to build watch with the parts of several dozen suppliers collapsed. Some years later the Swiss watch industry was rebuild as an industry of big companies like the Swatchgroup and many famous names vanished for ever or for a long time.

So the SBXY017 bears the name of the biggest game changer in the 20th century watch industry. No history? The opposite is true. Think about that before you thrill up your nose about “a modern watch without a soul and no historical meaning”.

The last 20 years the Astron line always bears the watches with the newest technologies, adding solarpower, radio control and GPS. I admired the technique but they didn’t reach my heart, mostly because of their extremely modern design and the size. Of course the 2,000 Euro (and up) price point was another reason.

This year Seiko made a big move. Typical for this company they made no big announcements but new watches with the historical Astron name appeared. They changed design teams (they took people from Grand Seiko) and made a downgrade in technical abilities. This new Astrons don’t have a GPS sensor, time is only radio controlled. The biggest change is the new design, much smaller and more comfortable and looking like a historical chronograph with the big and colorful second hand. The SBXY001-023 are all made of hard coated titanium (Diashield) and with super clear coating technology, a combination called “Comfotex ©”.

The ”chronograph buttons” are for the radio control funcitions like setting the time zone or controlling the last sync. I don’t know why Seiko released this models only a Japan. They are from 600 to 1,000 Euros without taxes and believe me I have never seen a watch with such quality in details at this price point. They have a built in sleep function to save power. Even without using this function the watch will work for 9 months without light. The power safe function is activated if the watch is stored in a dark place or is not moved for more than 2 days. Once exposed in the light again the hands and the date wheel are moving like magic to the correct time and date – a feast for the eye!

I hope you can see one life and admire the very well executed details – although spotting this watch outside Japan might be a bit difficult. I highly recommend to take a closer look at this watch with such a great name in watch history.

#newwatchalert : Seiko SSC817 "Golden Panda"
Hemel Air League for the weekend
The Seiko Monster Antarctica in broad sunlight today
#newwatchalert : Maranez Samui Army on Cuda strap from @maranezwatches. While Doxa Army is sold out (and with a ridiculous price in my opinion) and the Synchron Army is hard to find (and it's still no Doxa 😉) Maranez is the high quality Hommage alternative.
Happy Mother's Day with the Seiko Helmet Darth Vader
The mustard gang is back: Tiger Concept British Diver on mustard ribbed nato from @cheapestnatostraps.